Revenue Vs Profit: What Makes Them Different?

The terms “revenue” and “profit” are often used interchangeably. But when it comes to small business accounting, they’re most certainly not the same thing. And, in order to clearly grasp your company’s financial picture, it’s important that you understand the differences between revenue vs profit.

One thing is certain: both revenue and profit are key metrics that can help you measure your company’s health.

Revenue Vs Profit: The Basic Differences

Revenue is a general term that refers to the income that you bring into your business. Most often, revenue is generated through the sales of a product or service. However, income could be earned in other ways.

For example, your business could accrue interest on credit sales. Or, in the case of non-profits, income may be received through donations.

Profit is whatever money you have leftover after all your business’s expenses (COGS, payroll, rent, etc.) have been accounted for.

The examples above can help you gain a general understanding of how revenue vs profit works. But they are admittedly overly simplistic. In the real world, distinguishing between revenue and profit can be more complicated. There are actually a few different types of revenue and profit. And they each can affect your financial statements in different ways. Let’s take a closer look.

There are two main types of revenue that will affect your small business financial statements: accrued revenue and unearned revenue. Here’s what they are and how they affect your financials.

Accrued revenue is money that you’ve earned by providing a good or service, but haven’t yet been paid for.

For example, in my own freelance writing business, I may write a $300 article for a client on April 5th, send out the invoice for the article on April 30th, and receive payment on May 7th. So while I “earned” the $300 on April 5th by virtue of doing the writing, that $300 would be accrued revenue until cash was actually received on May 7th.

With accrual basis accounting, accrued revenue does count as income on your income statement. This means that accrued revenue has an immediate impact on each of your small business’s profit calculations. Recording revenue when it is earned as opposed to when payment is received keeps the company’s income from looking “lumpy.” Consider the example below to see why.

Imagine that a construction company signs a contract to complete a 6-month building project for a total payment of $500,000. If the company waits to record any revenue until the project is done, it will look like they had several months of no work. Instead, the company’s accountant will typically record a portion of the total revenue each month as the work is being done.

So, anytime that a business is pre-paid for a service or good, this is considered unearned revenue.

Unliked accrued revenue, unearned revenue does NOT count as income on your income statement until you’ve begun to fulfill your obligations.

For example, a company offers pre-sales on an upcoming product. Sales income would be considered unearned revenue until the product was actually shipped to buyers. Annual subscriptions, airline tickets, and advance rent payments are other common forms of unearned income.

As products or services are delivered over time, the business can begin to record prepaid income as revenue on its income statement. For example, imagine that a software company charges customers $600 per year (paid upfront) to use its software. In this case, the company could record $50 ($600 divided by 12 = $50) of revenue each month until their entire year’s obligation had been fulfilled.

Now that we’ve looked at the two main forms of revenue, let’s turn our attention to profit. Most small business financial statements will break profit down into three levels: gross profit, operating profit, and net profit. Here’s how each type of profit is calculated.

Gross profit is defined as your total revenue minus the Cost of Goods Sold (COGS).

For example, imagine that you own a furniture store that generated $50,000 in sales in a given month. You spent $25,000 acquiring the specific items that were sold. In this case, your gross profit for the month would be $25,000.

Gross profit is an important metric that can help you identify the profit margin on the items that you sell. However, it doesn’t truly represent a company’s overall profitability as it doesn’t take other expenses into account like payroll, rent, or marketing.

A company’s operating profit (also referred to as operating income) is total revenue minus COGS plus all other operating expenses like rent, utilities, and payroll.

In the furniture store example above, it may cost you $10,000 per month to pay your employees, plus another $5,000 to cover rent, utilities, and other expenses.

However, it’s important to point out that there are still a few expenses that are not accounted for in the operating profit line item. Examples include debt payments, tax expenses, and investment income.

Net profit is the money left over after all revenue and expenses have been accounted for. A company’s net profit is often called its “bottom line.”

There are a few additional expenses that may need to be deducted from a company’s operating profit to calculate its net income. Debt payments are a common expense that can dramatically reduce a company’s net profit, even if it enjoys a healthy operating profit.

For example, imagine that a dental practice owner takes out a 10-year, $500,000 small business loan with a 5% interest rate. The dentist uses the funds to purchase necessary equipment and towards a down payment on a building.

In this example, the dentist would need to pay $5,300 per month towards repayment on the loan. This $5,300 wouldn’t affect the dental practice’s operating profit but would reduce its net profit.

Owner pay is another confusing topic for small business owners. Should it be counted as an expense? Does it reduce a company’s profit? Typically, your personal income as an owner does not count as a business expense. An owner’s salary is included in the company’s balance sheet and cash flow statement. But it does not affect the company’s profit and loss statements.

An Example Of Revenue Vs Profit

Publicly-traded companies are required to openly publish their income statements for investors to evaluate. Let’s take a look at Target’s recent income statement for a sample of how a real company addresses revenue vs profit. All numbers shown below are in thousands. 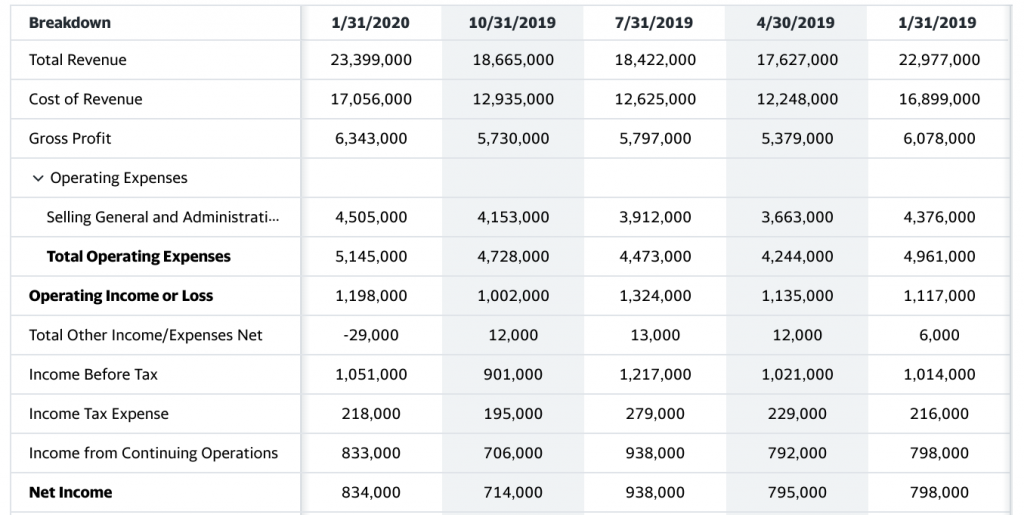 Let’s focus on Target’s income statement for the quarter ending January 31, 2020. The first number that you see at the very top is their total revenue of $23.339 billion. But then we see that Target’s COGS was just over $17 billion, leaving them with a Gross Profit of $6.43 billion.

If you own a small business, your income and expenses will be dramatically smaller than the numbers shown above from a massive company like Target. But your business will still follow the same accounting principles. Knowing how to differentiate between revenue vs profit is critical to gauge any company’s financial well-being, no matter the size. 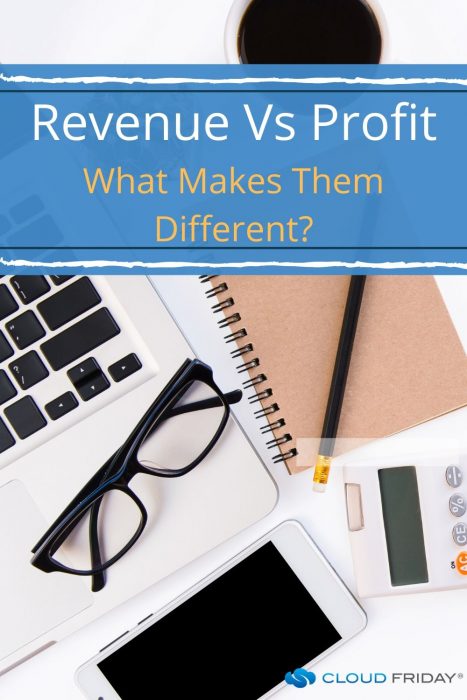 Develop A Month-End Closing Checklist For Your Small Business

The Many Types Of Business Insurance And When You Need Them

4 Benefits of Hiring An Accountant For Your Small Business

6 Tips To Make Filing Taxes Easier As A Small Business

How To Set Up A Small Business Budget

How To Make Your Brand Stand Out

Apps and Extensions That Make Owning A Business Easier

How To Develop Deeper Relationships With Your Customers

What Is The Difference Between Cash Vs Accrual Accounting?

Do I Need An EIN For My Business? 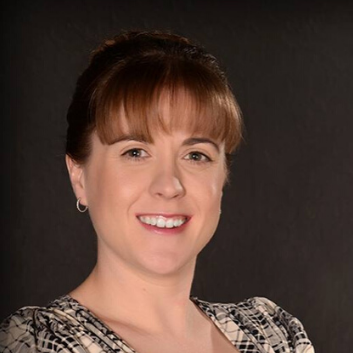